Recently I’ve been playing around with the digital maps of London available online. Primarily, Allison Muri’s The Grub Street Project, Locating London’s Past and the map search function in Old Bailey Online. This inevitably led me to look at those places in London associated with Daniel Defoe. At about the same time, I had been re-reading Pat Roger’s Grub Street: Studies in a Subculture and was again impressed by his detailed ecology of the parish of St Giles, Cripplegate ward. It is an area closely associated with Defoe, so I thought I’d take the opportunity to use some of these databases to briefly map out Defoe’s place of death.

Here’s a view of Cripplegate, or ‘Creplegate Parish’ in Strype’s edition of Stow’s Survey of the cities of London and Westminster (1720, 2 vols), courtesy of The Grub Street Project (click to see a zoom-able image): 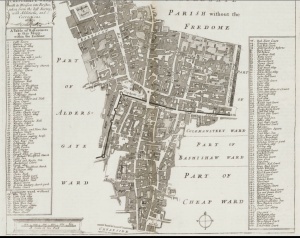 As Rogers argues, Defoe’s honorary membership of the Dunces club owes much to his beginning and ending his life within the purlieu of that home of the Dunces, Grub Street (Grub Street, 311-27). On Strype’s 1720 edition of Stow’s Survey (above), Grub street runs roughly North-South between and parallel to Moore Lane and White Cross Street. According to John R. Moore (Daniel Defoe: Citizen of the Modern World, 3) Defoe’s father ran a business from Fore Street: on the Strype map this began at St. Giles, ran into Moore Street which then became Posterne Street at its eastern end. The minister of St. Giles, Samuel Annesley, was praised in an elegy by Defoe in 1697. In the section of John Rocque’s A New and Accurate Survey of the cities of London and Westminster (1746), below, you can also see Grub Street running North off Fore Street (via Old Bailey Online, images courtesy of Motco Enterprises Limited Ref: http://www.motco.com): 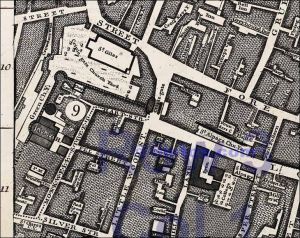 In the last months of his life Defoe was hiding from creditors, and between August 1730 and April 1731 he took lodgings in Ropemaker’s Alley, in the decidedly mixed environs of Cripplegate. Ropemaker’s Alley was just a few streets East of White Cross Alley where his wife, Mary, had property and Max Novak suggested that this might have enabled Defoe to keep in touch with his family (Daniel Defoe: Master of Fictions, 702). Ropemaker’s Alley cannot be seen in Strype’s Map: it is just North of the City Walls in the area known as the ‘Freedoms’. If you look on the Strype map it would be just above and just outside the far North-West corner of Cripplegate ward. On the next section of Rocque’s 1746 map, below, you can see it fairly clearly as a thin street running North-West from Finsbury, bordering Moorfields (‘a moorish rotten Ground’, Strype, 1.70). South East off Finsbury and below Moorfields was Bethlehem Hospital, or Bedlam. The dotted line represents the boundary chains of the City. 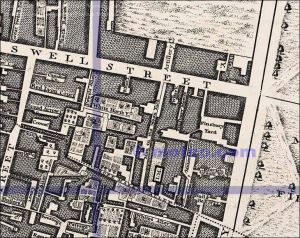 Strype describes Ropemaker’s Alley, in ‘Cripplegate Ward without the Wall’, as ‘pretty broad, with several Garden Houses, which are well built and inhabited’, which sounds rather genteel. Nearby, however, alleys and streets were ‘meanly built and inhabited’ and ‘very mean’ (Strype, 1:92) and the proximity to Grub Street would have confirmed for many Defoe’s association with the profession of hacks. Defoe died on the 24th or the 25th April 1731 and was buried in Bunhill Fields, just North from Chiswell street, and which is now the location of the nineteenth-century memorial to Defoe.